Map of Gökova in the «Bahriyye». All what the mariner needs to know — in a poetic style. 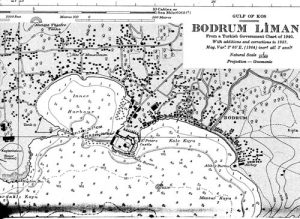 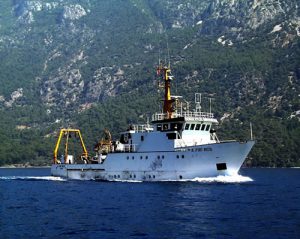 The surroundings are grand and lofty mountains. Therefore there are no further anchorages. At the end of the Kereme Golf there is the Gökova Stream. Next to this stream there is another one which is called the Kemer estuary. Boats can enter these streams but the waters are impotable. From these shores to Bodrum are ninety miles. None of the brooks at these coasts are potable. The grounds off the Gökova Stream are white sand, shallow but good holding grounds. In summer it is only exposed to the Imbat (the local westerly offshoot of the Meltemi). Heavy gusts can be expected. When the Imbat blows and anchoring is required, then you pass the Gökova Stream at the North, then one proceeds to the south then veers to the southwest and eventually one arrives at an island five miles southeast of the Gökova stream. This is called Gelibolucuk (little Gelibolu, to distinguish it fom the Gallipoli of the Hellespont. Kalliopolis meaning «Beautiful Township»). It is a good anchorage. But ships larger than galleys cannot enter.
One can anchor only in the passage between the Anatolian mainland and the island. Again, southwest of this one and three miles offshore is another island. It is called Oran (Ören, «the Ruins») island. This island is embroidered with buildings like the seeds of the pomegranates. It is said that it used to be a large township in the past. Now the buildings are left over. Off here is a natural harbour. Large ships can enter. It has to be entered from the Anatolian direction and from the southwest. Because there is plenty of depth here. To the north there are two islands but the passage between them is narrow and shoal. A galley will pass. Half a mile to the west of this island are rocks, care and prudence is required. Southwest of the island is Sögüt Cove (Karacasögüt). At the mouth of the cove is an island which is a good anchorage. There is no better anchorage here than the Small Günlük (Sweetgum). It is a natural cove. It is wedged between two mountains. It is a huge harbour. It is off the beaten track but even drinking water is available. Not many ships stop here. There are further anchorages in this bay, but if required, consult the chart.