Katabatic Winds in the Gökova Körfezi
(account by a professional seaman) 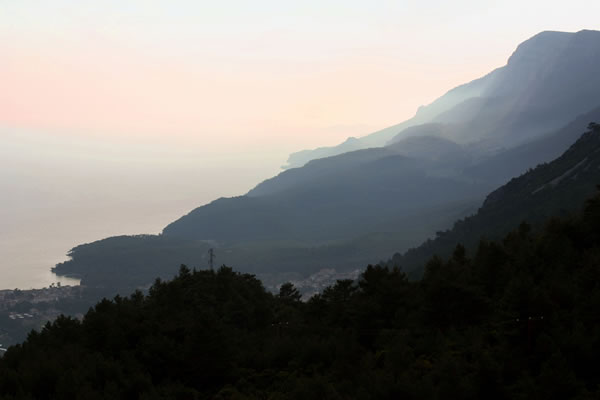 We dropped anchor in deep water at the western most extremity of this bay and took two stern lines ashore. The conditions here were calm and clear skies. On our way from Bodrum we had encountered strong ‘meltemi’ conditions. I explain: Around Bodrum the wind was North Westerly, gusting to approximately Force 6 in places. As we progressed further east into Gökova Körfezi the wind became more pronounced from the west, this in turn causing a strong swell. At times we could surf this swell and I would in future not tackle it again!

The swell was particularly strong around the area of ‘Akbük Burnu’ (north side, west of Sehir Adasi). Once we had passed this area the swell was less powerful. At the time I inspected ‘Akbük Limani’ whilst we cruised by, my assessment was that it appeared an uninteresting bay but useful escape hole from bad conditions…I was later to appreciate it!

During the afternoon several day boats anchored nearby us, we launched tenders to explore the islands (Sehir Adasi etc) and guests relaxed in the sun. The bay was pleasant as the wind did not reach around the promontory of rock on the western end.

At around 16:30 – 17:00 the day boats all started to leave. Within 15 minutes they had weighed anchor and motored away at high speed. I considered this and began to feel uneasy about my chosen anchorage. My guests were happy so I checked the strength of my anchor and lines, then grabbed a coffee and scanned the pilot book for options.

By 17:30 – 18:00 there were pronounced choppy waves coming directly across from the northern side of the bay. As I assessed the situation I took in the majestic vision of the high cliffs to the north and my uneasy feeling developed into one of impending disaster!

I made the decision to leave, ‘Akbük Limani’ springing to mind as the destination. Our jetboat was shipped; no mean feat as by this time the northerly waves were rocking us considerably. The crew in the other tender made to remove the shore lines from the rocks. The increasing sharp waves made this difficult and rather dangerous – each time the pilot neared the rocks the tender would be picked up and thrown forwards. By going astern he could narrowly avoid damaging the craft but the second man was thus unable to get ashore. We were now being buffeted so much by the increasing swell that I considered it a real danger to the yacht as the anchor could be jerked out of position at any time.

The crewman eventually got ashore and released the lines from the now wet and very slippery rocks; in the process he twice ended swimming in the water far away from the helpless tender. As soon as my stern was free we could raise the anchor and begin to motor north away from the anchorage. I took the tender on a long (20m) tow line as it was too risky to hang around and lift it onboard.

The water was blown flat by the wind, with the long spray streaks!

My thoughts were thus – motor directly north to the northern shore then west to ‘Akbük Limani’. I could now understand that this ferocious wind was pounding down off the mountain, a beautiful example of the Katabatic winds one normally only reads about!

As we reached approximately halfway to the north shore we could see that the water was blown flat by the wind, with the longs spray streaks typified on photos of gale conditions.

Under the cliffs we saw several small, well developed water spouts and numerous spiralling sprays. We could feel that the wind was blowing vertically down the mountain before pushing across the water. A most disconcerting experience.

We reached ‘Akbük Limani’ and prepared to drop anchor in 14 – 18m of water. In our haste we had not been able flake the chain properly upon weighing, so had to untwist 100m of chain by hand! Once secure we were lying in 20-23m of water with 110m of chain – I wanted no risk!

The speed, with which the wind arrived was astounding

My guests understandably were a little shaken up by our adventure as was the crew member who bravely tackled the slippery rocks. I was also somewhat rustled; the speed, with which the wind arrived from the moment the choppy waves started to a full gale blowing, was astounding. Even safely anchored in the new spot we had strong gusts which stretched us back on the full extent of our chain.

If I remember correctly it was after dark that the wind dropped off and it became calm, during the night when I checked the anchor the water was glassy and not a breath of beeze could be felt!

A month or so later whilst cruising around Göcek, I spoke with an experienced Gullet captain. Upon hearing my account he laughed and explained that the mountain was locally named ‘Grand Mountain’ and everyday produced the ‘Grand Wind’! Further, he happily pointed out that to the south west of the area were some lovely little bays which we should have visited instead! My lesson learnt, I considered the following points:

• Local day boats and gullets may appear to be sea-going cowboys, but their knowledge of the area and its conditions is not to be scoffed at. Take heed of their movements and of their advice!
• Obviously pilot books do not always have all the information. The advice given about the area around ‘Sehir Adasi’ says only that the wind can sometimes swing to the north east. Nothing indicates the possible ferocity or sudden appearance of the phenomenon.
• Always take notice of your surroundings, planning an escape route may sound like boring old seaman talk, however you never know when a little foresight will ease a sticky situation.